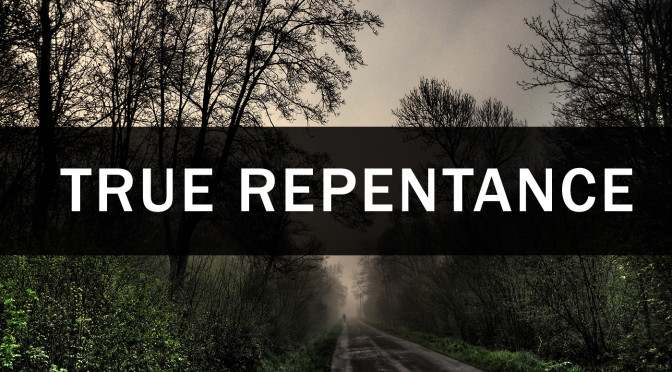 Repentance is a Godward awakening from the evil of sin. True repentance is a dynamic of God-centeredness. It is a grace of God whereby a sinner is inwardly awakened and outwardly reformed by the Holy and unto the Holy. In Greek, the word for repentance has reference to a fundamental change of mind or a radical redirection of heart. In Hebrew, it has reference to a turning away from the state or occurrence of sin and toward God. In this sense, it is the gravity of God-centeredness acting in love upon sinners in sin. True repentance is not about self; it is about God. In brokenness, the sinner turns to God for forgiveness and renewal.

Repentance is a necessary component of genuine conversion (Luke 3:3; 13:3, 5). Jesus said that He came to call “sinners to repentance” (Luke 5:32). The Gospel of Matthew notes that Jesus began His ministry by preaching, “Repent, for the kingdom of heaven is at hand” (Matt 4:17). Similarly, the first words of Jesus recorded in the Gospel of Mark are, “The time is fulfilled, and the kingdom of God is at hand; repent and believe in the gospel” (Mk 1:15). Repentance is a definite call of the gospel.

Repentance also remains continually necessary after conversion (Psalm 51; Luke 17:3-4). As George Swinnock once said, “A sheep may fall into the ditch and defile himself, but he hastens out of it as soon as he can. But the swine chooses a dirty place and wallows all the day long in the mud and mire. A saint may fall into sin, but he hastens to recover himself by repentance. In contrast, a sinner lives in it day and night (Prov. 4:17)” (Works, 5:379).

Below is a simple list of essential elements of true repentance.

The first element of repentance is the sinners awakened acknowledgement of the wickedness of his sin. As with the prodigal son, the starting point of repentance was marked by the statement, “But when he came to himself” (Lk 15:17). As Thomas Watson wisely said, “The eye is made both for seeing and weeping. Sin must first be seen before it can be wept for.” God, speaking through the prophet, makes this point very clear: “I will return again to my place, until they acknowledge their guilt and seek my face, and in their distress earnestly seek me” (Hosea 5:15). Without acknowledgement, there can be no repentance. Without acknowledgement of God and His holiness, of self and its wretchedness, of sin and its wickedness, there can be no true repentance.

Once a sin is acknowledged by the soul, it must say the same thing as God says about it. This is the meaning of the original. To confess a sin is to say the same thing that God would say about that sin. The Prophet Jeremiah shows that in addition to the acknowledgement of sin, admission and ownership of specific guilt should be demonstrated (Jer 3:13, “that you … and that you”).

Not only are we to call sin, sin—instead of a mistake or some other palatable misnomer—we are to be specific in identifying it as God would identify it. This also involves owning the sin for all that it truly is before God. It is, as Watson said, “self-accusing.” “When we come before God, we must accuse ourselves. … The humble sinner does more than accuse himself; he, as it were, sits in judgment and passes sentence upon himself. He confesses that he has deserved to be bound over to the wrath of God” (Watson, 28-29). Although a man acknowledges his sin to himself, without confession before God there is no true repentance. Without such confession, there will be no mercy nor prospering in the Lord (Prov 28:13). As Christians, we are also called to confess our sins to one another (James 5:16).

Sorrow over one’s offense against God is essential to true repentance. The Psalmist shows that a godly confession is one wherein the heart is deeply sorry toward God: “I confess my iniquity; I am sorry for my sin” (Ps 38:18). Watson says, “A woman may as well expect to have a child without pangs as one can have repentance without sorrow! … he that can repent without sorrowing, suspect his repentance.” King David described this godly sorrow as “a broken spirit; a broken and contrite heart, O God, you will not despise” (Ps 51:17). True repentance involves the call to “rend your hearts” (Joel 2:13) and “Be wretched and mourn and weep. Let your laughter be turned to mourning and your joy to gloom” (James 4:9). As Watson says, “A true penitent labours to work his heart into a sorrowing frame. He blesses God when he can weep; he is glad of a rainy day, for he knows that it is a repentance he will have no cause to repent of” (20). If repentance is true, it will be God-centered. If the heart is God-centered in repentance, it will be shaken in a holy agony.

To honorably esteem God, one must rightly esteem the dishonor of his sin against God. There can be no acceptable estimation of one’s own sin except that it be accompanied by shame. The Lord instructed the Prophet Ezekiel to preach to Israel in such a way “that they may be ashamed of their iniquities” (Eze 43:10). Ezra cried out, “O my God, I am ashamed and blush to lift my face to you, my God, for our iniquities have risen higher than our heads, and our guilt has mounted up to the heavens” (Ezra 9:6). In His gracious substitution on our behalf, Christ was greatly shamed for our sin. The cross was a grotesque spectacle of tremendous shame. “Did our sins put Christ to shame, and shall they not put us to shame? Did he wear the purple and shall not our cheeks wear crimson? Who can behold the sun as it were blushing at Christ’s passion, and hiding itself in an eclipse and his face not blush?” (Watson, 40-41). Without shame over our sin, there can hardly be any true acknowledgement of it. Shame over our sin is a basic ingredient in true repentance.

If there be any love to God in our hearts then by necessity there will also be hatred of sin. This is not hatred of getting caught, hatred of exposure, or hatred of consequences. No, this is hatred of sin itself supremely because it is such a vile and base offense against our Lord whom we love more than life itself. David demonstrates his Godward hatred of sin when he says, “I hate every false way” (Ps 119:104). Such hatred is not directed to any one matter in particular, except that sin offends God. “So to discover repentance there is no better sign than by a holy antipathy against sin. Sound repentance begins in love to God—and ends in the hatred of sin” (Watson, 45). As Christians, we are daily striving to grow in our love of what God loves and hate of what God hates. Repentance is therefore a vital means of our sanctification. Without hatred of one’s own sin committed against God, there can be no love to God. True repentance includes hatred of the offense causing sin.

Repentance means not only a heart broken for sin but from sin. Repentance in its most basic animation is a deliberate turning away from sin. This is portrayed abundantly in Scripture. A few examples will suffice here: “If iniquity is in your hand, put it far away” (Job 11:14); “Thus says the Lord GOD: Repent and turn away from your idols, and turn away your faces from all your abominations” (Eze 14:6); “let the wicked forsake his way, and the unrighteous man his thoughts; let him return to the LORD, that he may have compassion on him, and to our God, for he will abundantly pardon” (Is 55:7). It has well been said that if God is drawing you to Himself then He is also drawing you away from sin. Without a resolved turning away from sin, any attempt at professing repentance proves untrue.

This is the highest and crowning purpose and goal of repentance: a turning to God. True repentance is not merely moral; it is Godward. It departs from all that offends God in complete betrayal of sin’s adulterous lure so as to return to the gracious Lover of sinners. If God is not your goal in repentance, your repentance is not genuine. This objective purpose of repentance is made plain in several texts: “that they should repent and turn to God, performing deeds in keeping with their repentance” (Acts 26:20); “testifying both to Jews and to Greeks of repentance toward God and of faith in our Lord Jesus Christ” (Ac 20:21); “let the wicked forsake his way, and the unrighteous man his thoughts; let him return to the LORD, that he may have compassion on him, and to our God, for he will abundantly pardon” (Is 55:7). Repentance is not just a turning away from sin, it is a turning to God—it is fundamentally God-centered. The prodigal son did not merely leave the swine; he specifically turned his unworthy face to return to his father. The Lord Himself grieves over a form of leaving sin without coming to Him: “They return, but not upward; they are like a treacherous bow” (Hos 7:16).

Turning to God is for our benefit. Our repentance is of no benefit to God but to ourselves. If a man drinks of a fountain he benefits himself, not the fountain. If he beholds the light of the sun he himself is refreshed by it, not the sun. If we turn from our sins to God, God is not advantaged by it. It is only we ourselves who reap the benefit. (Watson, 58).

May God be glorified in the delight of our souls to turn away from every distracting lure of lesser glory and destructive lie of sin, to turn to God—our treasure and greatest delight. May we as Christians grow in our view of God, sensitivity and apprehension of sin, and practice of repentance in all humility and reverence.