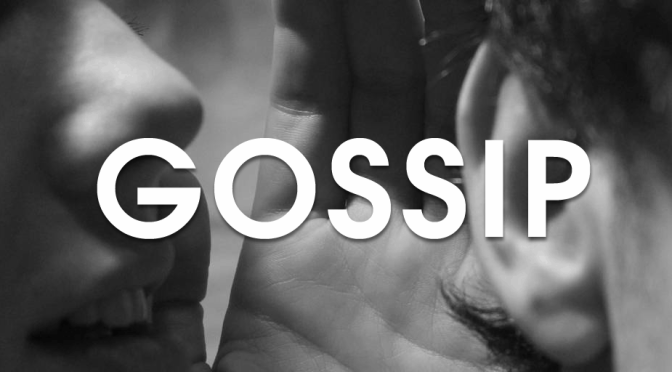 God flatly condemns gossip. Even in its best form, it is an evil work of the tongue that betrays confidence and serves to slander. While it includes the notion of spreading rumors or lies about someone and is often assumed to be with ill-intent, gossip need not be malicious or false. It is the truthful but non-redemptive talk about others that is too often the besetting sin of Christians.

In the English language, we get the word “gossip” from the Old English “godsibb.” Oxford Dictionary tells us that the word was originally used to describe “a person related to one in God;” like the words “godfather” or “godmother.” It is a compound of god and sibb, the source of “sibling.” Its original definition was: “One who has contracted spiritual affinity with another by acting as a sponsor at a baptism” (OED). In medieval times a gossip was “a close friend, a person with whom one gossips” (COED). The history of this word illustrates the nature of what it has come to mean. It represents conversation belonging to a person who is intimately, even spiritually, related. It describes the divulging of private information.

In God’s Word, the idea behind the translation of the word “gossip” is always negative.

Gossip is a Species of Slander

The word is often grouped or associated with other sins of the tongue. For instance, it is written in 2 Corinthians 12:20, “For I fear that perhaps when I come I may find you not as I wish, and that you may find me not as you wish—that perhaps there may be quarreling, jealousy, anger, hostility, slander, gossip, conceit, and disorder.” Here slander and gossip are closely connected. We find this same connection in the writings of the early church as well. In 1 Clement 30:3, “gossip” is joined with “evil speech” or “slander”: “Let us put on harmony, being humble-minded, exercising self control, keeping ourselves far away from all gossip and evil speech” (also in 1 Clement 35:5).

In Romans 1 it is grouped under the traits of “debased mind” (Rom 1:28) and is in class with “all manner of unrighteousness” (Rom 1:29). Again, “gossips” and “slanderers” are presented side-by-side (Rom 1:29-30); they are cousins in concert playing maladies of the tongue. Gossip is a species of slander, which is overtly prohibited in the Law of God to Israel (Lev 19:16).

“Gossip” translates the Greek word that comes from the verb “to whisper” (psithurismos) and most literally means “a whispering” with the idea of “a secret slander” (Abbott-Smith). One lexicon describes the Greek word as “providing harmful information about a person, often spoken in whispers or in low voice, with the implication that such information is not widely known and therefore should presumably be kept secret” (Louw-Nida). Another describes it as “derogatory information about someone that is offered in a tone of confidentiality” (BDAG). Luther’s translation of the noun used a German word that means “scandal-mongering.” The sense of the word denotes that which is breathed against another’s character. It need not be malicious, but is always a mark of indiscretion.

People gossip when they go about “saying what they should not” (1 Tim 5:13). Gossip is a form of slandering that reveals secrets. Proverbs 11:13 says, “Whoever goes about slandering reveals secrets, but he who is trustworthy in spirit keeps a thing covered.” Such an “informer” inflicts injury and does not promote the glory of God in the grace of the gospel. In Proverbs 20:19, he is called “a simple babbler,” which is associated with one who speaks foolishly, indiscreetly.

As Christians, we are to act in love toward one another (Rom 12:10; Gal 5:14-15; 1 Thess 4:9). And in the context of information about people, love does not broadcast or whisper the sins or weaknesses of others. “Whoever covers an offense seeks love, but he who repeats a matter separates close friends” (Proverbs 17:9). So the one who acts in love, watches over their heart and tongue so as not to uncover that which is private. Charles Bridges insightfully notes, “Another breach of love is reproved here. The Gospel does not shut us up in our own private interests, as if we had no sympathy for our neighbor. It is a universal brotherhood of love. Yet it rebukes a gossip who, having no business of his own, traffics with his neighbor’s name and honor and sells his scandals for gain or wantonness.”

“Let him not see the results of misplaced confidence dropping out of our mouth. It is of great moment to our peace—that those about us should be of a faithful spirit, fully worthy of our confidence; to whom it is not necessary on every occasion to enjoin secrecy; true to our interest as to their own; who would rather refuse a trust than betray it; whose bosom is a cover of concealment, except when the honor of God and the interests of society plainly forbids. Invaluable is such a friend, but rare indeed in this deceitful world. Yet let it never be forgotten, that Christian consistency includes the faithful spirit; and the habitual absence of it under a plausible religion makes it most doubtful, whether the spirit and mind of Christ is not altogether wanting.” (Bridges, 103–104).

A disciplined tongue is a restraining mercy to the Church

Again, we would do well to remember that “mischief might not be intended. But to amuse ourselves with the follies or weakness of our brethren, is sinful trifling, fraught with injury. … A disciplined tongue is a restraining mercy to the Church.” (Bridges, 225). On this, Matthew Henry writes,

“The way to preserve peace among relations and neighbours is to make the best of everything, not to tell others what has been said or done against them when it is not at all necessary to their safety … the ripping up of faults is the ripping out of love, and nothing tends more to the separating of friends, and setting them at variance, than the repeating of matters that have been in variance … the best method of peace is by an amnesty or act of oblivion.” (Henry, 992).

Gossip is the Fruit of Pride

Gossip is the fruit of pride, being motivated by a queer delight in the failings or difficult circumstances of others. It is a shameful sin to find pleasure in the negative news of another. Yet gossip is curiously hard to resist, like a tasty morsel: “The words of a whisperer are like delicious morsels; they go down into the inner parts of the body” (Pr 18:8; 26:22). So even though the tongue is so small a member of our bodies, the perverse cravings for the words of a whisperer (gossip) are great and have tremendous potential for damage like a small spark to a massive wildfire (James 3:5). The happiness of many a life has been tragically scared and burned by thoughtless, to say nothing of ill-intended, gossip.

May we take to heart the words of Charles Spurgeon:

Gossips of both genders, give up the shameful trade of talebearing; don’t be the devil’s bellows any longer to blow up the fire of strife. Leave off setting people by the ears. If you do not cut a bit off your tongues, at least season them with the salt of grace. Praise God more and blame neighbours less. Any goose can cackle, any fly can find out a sore place, any empty barrel can give forth sound, any brier can tear a man’s flesh. No flies will go down your throat if you keep your mouth shut, and no evil-speaking will come up. Think much, but say little: be quick at work and slow at talk; and above all, ask the great Lord to set a watch over your lips.

Gossip is a Besetting Sin

Gossip is a besetting sin of Christians. It involves a non-redemptive conversation about someone else to a person who is not directly involved. If what you have to say reports something negative that (a) does not make much of God, (b) does not bless the person being talked about, and (c) does not sanctify the hearer, then it is likely gossip. If you are sharing a personal sin or weakness about someone else and you are talking to someone not immediately involved in the circumstance (either in the sin or the correction of that sin), then it is likely gossip. Praying for someone is not the same as being involved in the circumstance and should not be equated to ministering in the correction of that sin. Gossip is all too often committed under the guise of a “prayer request” or an effort to help someone “better understand the situation.” In such cases, it remains the whispering of a secret, the unloving uncovering of that which love ought to cover, the intrusion of a bad interest in the language and reasoning of good intentions. It is better to pour your heart out to God rather than spread the sins of others before man.

May we as Christians think and speak with wisdom and discretion, with grace and love, with humility and sensitivity. May we increasingly seek to glorify God with our tongues, being mindful of God so as to be good stewards of whatever information we might possess. May we be more deliberate with our conversations to make much of Christ and the gospel and less of people and negative news. May our prayers and prayer requests be adorned in the beauty of holiness and meekness, with all contentment in knowing that God knows such needs before we or others do.